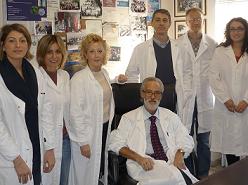 Proteomics, the study of proteins in cells, uses sophisticated technological platforms to define “phenotypic mapping” that is, discovering proteins involved in normal and pathologic cellular processes.

Some differentiation mechanisms of musculoskeletal cells till today unknown have been discovered by the study performed by investigators from the Rizzoli Orthopaedic Institute in Bologna, Alberto Bavelloni and Manuela Piazzi coordinated by Prof. Lucio Cocco from the Department of Human Anatomy of the University of Bologna.

“For the past two years we worked as a research group split in three laboratories – the Rizzoli team explain. – Since 2008 Bologna has been one of the five Italian hubs of the National Network for the study of Human Proteomics. Our Laboratory of Musculoskeletal Cell Biology, directed by Prof. Nadir Mario Maraldi, together with the Department of Human Anatomical Sciences and Physiology of the Musculoskeletal System of the Bologna University and the Department of Pathology and Histology of the University of Modena are involved in Proteomic studies, in both normal and pathological conditions, financed by FIRB, the Fund for Investments in Basic Research, that created the National Proteomic Network in line with its goal to support activities aimed at the development of scientific knowledge with emphasis on Italian competition in the International field."

A significant goal in this phase of the research project performed in Bologna is the fact that “Molecular and Cellular Proteomics”, an International Journal in this field, dedicated its December cover and Editorial to the study, underlining its importance, from the basic science standpoint as well as its possible therapeutic implications in diseases associated to muscle differentiation.