Three thousand square meters of new constructions and four thousands heavily refurbished, for a total investment of 18 million Euros, renovate the Modern Wing of the Rizzoli Orthopaedic Institute, the so-called “Monoblock” which has accompanied the historical site of San Michele in Bosco since the ‘50s.

A five-storey building, constructed from scratch (the so-called “Spina”) permits the reorganization of the hospital spaces. A new hall with direct access to the central admission desk, a new Operating Block with rooms characterized by their structural and instrumental avant-garde, new Emergency Room and Pharmacy spaces, the latter’s reorganization being co-funded by a contribution of 500.000 Euros from the Carisbo Foundation; at the floors’ wards, new spaces for personnel, patients and visitors, through the construction of a multi-storey structure. 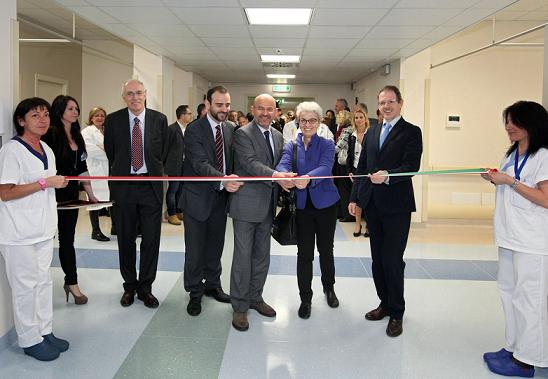 A further technological investment was presented on the occasion of today’s opening: since December, the FUS (Focused Ultrasound Surgery), a 1.250.000 Euros worth equipment, has been utilized at the Rizzoli Institute for the experimental ultrasound treatment of some cases of osteo-articular tumors.

“It was complicated to perform such significant works without interrupting the hospital activity – explains the director general Giovanni Baldi, who has today inaugurated the new Rizzoli together with the Health Policies Assessor, Carlo Lusenti, and Rizzoli’s scientific director Francesco Antonio Manzoli. – Thanks to this intervention, started in 2008 and prosecuted for four years and a half, the Rizzoli Institute can rely today on an organization of spaces which is more functional to the exigencies of the health staff and more comfortable for patients and visitors”.

The intervention has involved all the Hospital floors. At the ground floor, the new entrance is provided with a large external platform roof, permitting sheltered access for patients, in addition to the stand of private vehicles accompanying or boarding not-self-sufficient patients. Internally, thanks to the joint project activity of different professionals and institutions, the two newly realized waiting rooms are characterized by the special care dedicated to the welcoming of visitors: free consultation of dispensed books, plants and furniture atypical for a hospital.

The first floor hosts the Operating Rooms. Thanks to the refurbishment and enlargement of the surface, four 60-square-meters rooms, a resuscitation room, preparation spaces and other support spaces are now available. Such intervention completes the operating “plate”, overall constituted by ten rooms, characterized by a particularly efficient space organization and by a technological equipment appropriate to the necessities of a surgical hospital of national reference such as the Rizzoli Institute.

The Pharmacy, which was so far located in the Monumental wing of the Institute, is now extended over a surface of 600 square meters in the basement. The funding by the Foundation Cassa di Risparmio in Bologna allowed to set up a semi-automated pharmacy, utilizing a rotating closet for the medical devices: the requests forwarded from the ward are directly sent to the closet’s computer, which moves on ruts unto the location of the required pharmaceutical product.

The modifications introduced at the Second, Third and Fourth floors are mostly connected to the realization of the new building, allowing to reinforce some services supporting the existing recovery wards and to optimize the internal pathways. Furthermore, interventions for the compliance of fire systems, including the integration of fire doors at the wards and of automated entry doors, have been realized on each floor of the Modern Wing. 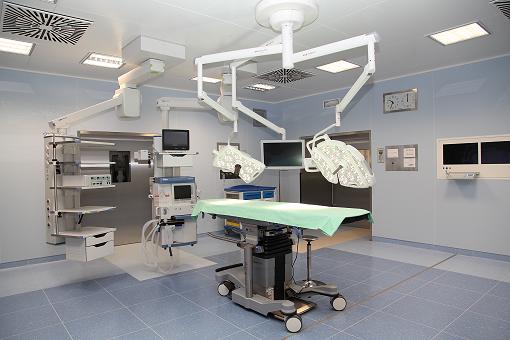