Prof. Ioannidis from the University of Stanford at the Rizzoli Institute, July 8th

Prof. John Ioannidis, Director of the Prevention Research Center of the University of Stanford, will be at the Rizzoli Orthopaedic Institute of Bologna (Auditorium, Research Center, via di Barbiano 1/10) on Tuesday, July 8th at 12 noon for a lecture named “Big data: promises and caveats in their use and re-use” (meaning with “big data” the data collections which, given their dimensions and complexity, require especially evolved tools for their management and analysis). The event belongs to a series of meetings with the protagonists of International biomedical research, promoted by Rizzoli’s Scientific Director, Francesco Antonio Manzoli. 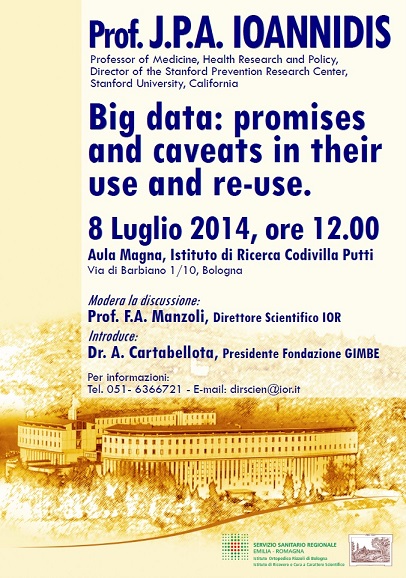 Prof. Ioannidis is one of the world top experts in the field of genetic epidemiology. Among the most quoted authors ever in international scientific literature, he has published over 700 scientific articles concerning several distinct disciplines, from genetics to breast, prostate and lung tumors, to epidemiological and statistical methodologies.

Additionally, he has animated the scientific debate on the alternative modalities for the use of research funds. He is acknowledged as the leading methodologist in clinical research among his generation. His article “Why Most Published Research Findings Are False”, published on PLoS Medicine in 2005, was the most consulted and downloaded article in the review history. The Atlantic has selected Ioannidis as the 2010 “Bravest Thinker”, defining him “one of the most influential scientists alive”.