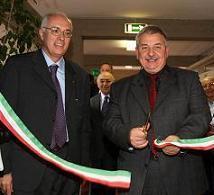 Sixty-seven “new” researchers, completely renovated settings in the Research Center, 20 million euros to start for the first three years: six new laboratories compose the now operative RIT-Research Innovation Technology, the new Rizzoli Department, which is part of the platform “Life Sciences” of the Bolognese Tecnopolo in construction at the ex-Manifattura Tabacchi.

The names are: BIC, BITTA, CLIBI, NABI, PROMETEO, RAMSES. Acronyms which enclose a heritage of scientific excellence in numerous research domains: from regenerative medicine to experimental studies on biocompatible materials and medical devices, from nano biotechnologies to clinical applications in bioengineering and bioinformatics.

Inaugurated today by the Emilia-Romagna Regional Counsellors in Productive Activities and in Health Policies, Duccio Campagnoli and Giovanni Bissoni, and by the Councellor to Health of the Bologna Province Giuliano Barigazzi, by Rizzoli Executive Officer Giovanni Baldi and by the Scientific Director Francesco Antonio Manzoli, the six laboratories are a challenge to technological transfers.

Manzoli, the Scientific Director underlined: “Our researchers have always worked with industries and enterprises involved in research & development. In the years we deposited patents, participated in partnership projects, were consultants for private enterprises who needed our solid know-how. Joining the Bolognese Tecnopolo project, and entering the Emilia-Romagna Region High Technology Network is thus a natural step for Rizzoli and an opportunity to give a stabile asset to the competence that allows us to transfer technology in a serious scientific manner and looks into the future of our territory.”

In the six laboratories – where Andrea Facchini, Pier Maria Fornasari, Roberto Giardino, Maurilio Marcacci, Luca Sangiorgi, Marco Viceconti are scientifically responsible – full time research is organized for researchers. New instruments will be bought for more than 2 million euro, amongst which some so new that they are only  obtainable for research and even so in a very limited number worldwide.

Of the 20 million euros necessary for this investment to get the six Rizzoli RIT Department laboratories started, half are covered by European funds that finance the Tecnopolo (Funding POS-FESR: Operative regional Program of the European Fund for Regional Development 2007-2013) and the other half are covered by the Rizzoli Institute.