Tumors, the state of the art on research: the Italian Cancer Society Meeting at the Rizzoli in Bologna

On October 1st-4th, the Rizzoli Orthopaedic Institute in Bologna will host the 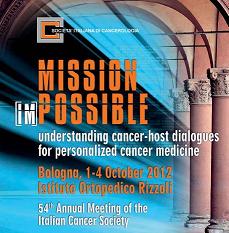 The main Italian oncology research centers will be represented together with International experts; debates in the most promising fields of research will take place. Among these, the role of insulin in cancer development and the possible anticancer effects of drugs used in the treatment of diabetes; with the double impact of the immune system on cancer, by contrasting it; as well as, according to recent studies that have started a lively discussion, as “facilitators”, with characteristics and alterations at the molecular level that determine the onset of various types of tumor, in particular lymphomas and sarcomas.

“With over half of the speakers from international institutions – says Katia Scotlandi, Chief of Development of Biomolecular Therapies at the Rizzoli Institute Experimental Oncology Laboratory and Scientific Coordinator together with Guido Biasco from the Bologna University – we confirm the ambitious SIC tradition: to make accessible, also to young researchers, a debate which for the scientific level of the presentations is comparable to the most important international meetings.”
For researchers under 35, during the closing ceremony on October 4th, dedicated prizes are awarded by the SIC President Riccardo Dolcetti from the National Cancer Institute in Aviano.

Prof. Francesco Antonio Manzoli, Scientific Director of the Rizzoli Institute will inaugurate the meeting on October 1st at 2.30 p.m.

The Italian Society of Cancer (SIC), founded in 1952, was the first association of researchers working in the field of experimental and clinical oncology in Italy. The last annual meeting in Bologna was in 1990, organized by prominent researchers in experimental oncology like Guido Paolucci, an internationally renowned pediatric oncologist and Mario Campanacci, a pioneer in the discipline of orthopaedic oncology, for which the Rizzoli Institute is today the national and international referral center.. In remembrance of Giorgio Prodi, the Giorgio Prodi lecture will be held on October 2nd.