Henry Fuseli in the Carracci cloister

San Michele in Bosco Bologna stop on the Grand Tour

For almost 250 years, a small graffito inscription has stood in the octagonal cloister of San Michele in Bosco, on the portion of plaster painted by Ludovico Carracci with 'The seven maidens sent to tempt St Benedict'. It reads:

Amor mio ("My love" in English)

She is not alone, however. Immediately below, someone added in different handwriting:

It may sound strange, but we know in both cases who it is. Johann Heinrich Füssli, born in Zurich in 1741, took the name Henry Fuseli after settling in Great Britain in 1763. He came into contact with Joshua Reynolds, the leading English painter of the time, and was encouraged to practise painting. Thus, he left for Italy at the end of 1769 to go to Rome to study Renaissance art. The Italian stay ended in 1778. Fuseli left for Zurich (he would arrive there in October) and it was during this return journey that he stopped off in Bologna, visiting the cloister frescoed by Ludovico Carracci and collaborators in San Michele in Bosco several times. We know from his letters of his enthusiasm for those paintings - he preferred them to the vaults frescoed by Annibale Carracci in the Galleria Farnese in Rome. However, in a letter of 29 September 1778, he wrote that he had left a 'seal of the heart' on the wall painted by Carracci - it is our graffito.

Fuseli's appreciation was later endorsed in 1799 by his young friend William Young Ottley, on the occasion of the Bolognese passage of his 'grand tour'. Ottley (1771-1836), a less talented painter but a great connoisseur and above all a great dealer in Italian art, then became curator of the print and drawing cabinet at the British Museum.

Throughout the 18th century, every illustrious person interested in art and in transit through Bologna did not fail to visit San Michele in Bosco and in particular its octagonal cloister painted in 1604-1605 by Ludovico Carracci and collaborators, despite the fact that the paintings were already largely ruined. This was the case for Montesquieu in 1729 (he mentions it in his Italian Journey), in 1759 for Jean-Honoré Fragonard, later to become one of the greatest French painters, and again in 1765 for Joseph-Jérôme Le Français de Lalande, probably the greatest French astronomer of the 18th century, as well as many others including Fuseli (1778) and Ottley (1799).

PS The image of Fuseli in the cloister was processed using the portrait of Henry Fuseli painted by James Northcote in 1778 (source commons.wikimedia.org). 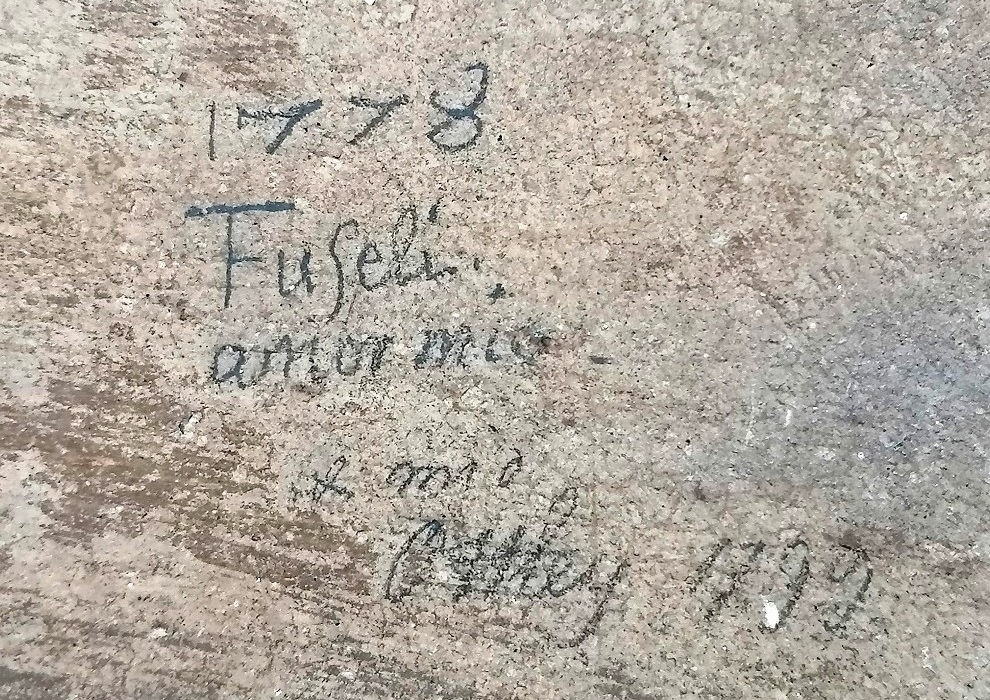