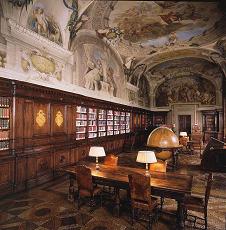 The Central Library, titled so after King Umberto I, arose from the sixteenth-century rooms where once the books of the Olivetani Monks were kept.

There is controversy as to the exact date of the construction of the first library of the convent of Saint Michele in Bosco: to some it was raised towards the end of the 15th century, while others suggest the year 1517 under the Priorate of Barnaba Cevenini.

It is certain that in 1677 Taddeo Pepoli, prior of the convent, decided on his own account to refresh the library, entrusting the task of architecture to Gian Giacomo Monti, and the task of painting to Domenico Maria Canuti.

In the year 1762 Father Rosini da Lendinara finally completed the world globe, still available to be seen in the library, composed so only from maps and descriptions of expert explorers.

With the suppression of the religious in 1797, the library suffered great damage: the antique 16th century shelves were destroyed while the precious miniature books and manuscripts were dispersed.

The convent went through a dark period in these years and they had to wait until 1841, the year in which the complex became the residential place of the Legato Pontificio Spinola, for the rooms painted by Canuti to regain their once lost prestigious value: in fact the rooms of the library were used as a Hall of Princes, Cardinals, Knights and famous politicians until 1880, when Professor Rizzoli acquired the convent to reconstruct as an Orthopedic Hospital.

But the library only regained its greatness when in 1922, the then current director of the Rizzoli Orthopedic Institute, Vittorio Putti, restored the rooms and used these to hold all the old and wellworn books.

And so the estate, set up in 1900, thanks to the donations of the Bologna Province to honour the memory of King Umberto I, was initiated as a library, representing one of the most complete and rarest collection of books in the entire field of orthopedics.